First of all, let me say I LOVE IT! I don't know why I feel the need to color my hair crazy colors. Maybe it's my mid-life crisis. Anyway, I love it. It took ALL day long but I love it. Did I mention I love it?

I did try to make it wearable for work so if you are wondering why in the heck only parts of it are done that's why. I bleached portions of it using Manic Panic Flash Lightning.

Then used Manic Panic Emily the Strange U Blu It. 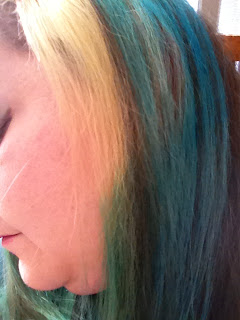 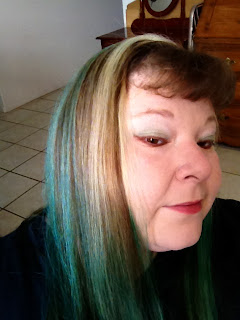 I realized, it's only hair and if I hate it, it will grow out. It turned out better than I expected. Express yourself!
Posted by KAM at 5:03 PM

I was reminded yesterday that I haven't updated my blog in a while. Yeah, I could use the excuse that I have been busy because I really have but more likely that the days I have time, I just end up cleaning something else or worse, sitting like a vegetable in front of a TV screen.

First of all, I have to say a huge congratulations to Russel for passing his last Red Hat exam. It was a huge relief for me because I know how hard these exams are and how long he studied. You have no idea how hard it was to quit bugging him during his study time! I am so proud of him and I am glad he can finally get back to doing some of the things he was missing like flying, playing his drums, watching movies and doing fun stuff. Of course, there will be more certifications and testing down the line but a few weeks or months off will be great.

In other news, Russel and I went to Houston for his cousin, Jason's wedding. It was very beautiful. On our way there (and back) we stopped at Buc-ees so I could get a shirt. The one on the way to Houston didn't have shirts so we stocked up on road trip food. I picked up some Beaver Nuggets to try because I heard they were awesome. The were better than awesome! OMG These things are incredibly addictive and not very convenient since you can only get them at the Buc-ees store. I have tried to get everyone else addicted to them too including Dinah. I am telling you....go to Buc-ees and get yourself at least 3 bags...bare minimum! On our way back from Houston we stopped at another Buc-ees and they had shirts! So I finally have an official Buc-ees shirt. When Russel went to Houston to take his exam he was nice enough to stop on the way back and get my Beaver Nugget fix. I love him so much! 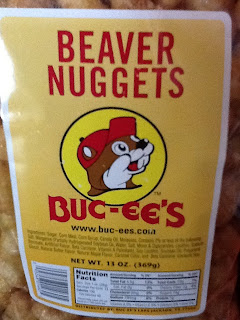 Bella news: Bella had her last appointment with the specialty vet. She has been cleared to be free from her box and return to normal activity. We still try to keep her from jumping, hopping, and going down stairs. She is very happy to have her legs back. It seems like she wants to run everywhere she goes now. I am so glad she is better and almost back to normal. Her left rear leg is still weaker than the right, but the doctor said it will get stronger. She is even trying to play fight with Ranger and put him in his place. She never lost her Alpha status. :-)

Juan news: Juan has been even busier than I have lately. He went to Solo & Ensemble and received a 1 (highest score) for his flute solo. I never even heard him practice. He has also been practicing for the One Act Play at school. The play is based on Edith Stein who was a Jewish woman who lived during WWII and converted to Catholicism and became a nun. The play was great and Juan did a wonderful job. I was very proud. Juan was also asked to serve on the Pastoral Council at church. He meets with the council and the priest to discuss issues within the church. Juan is loved by everyone in the church. He's a popular young man. At his one act play, I had to fight the church ladies to get to him and give him a hug. LOL. I am very proud of the young man he has become and I wish he didn't grow up so fast.


That's pretty much an update of what's been going on. More updates to come as time permits!
Posted by KAM at 8:01 AM